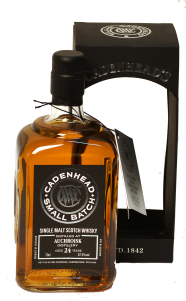 I have a feeling, sometimes, that the entire island of the UK (England, Wales, Scotland) are playing a joke on me. Heck, even Ireland may be in on it. Which is okay, I like a good joke.

Try saying any of the town/city names that aren’t well known in any of the country. Just try. If it isn’t Bath, London, or just a few letters, you’ll say it wrong. And find out that all those extra letters don’t count.

Going to Leicestershire to have some Worcestershire? Don’t say them the same, otherwise the locals will give you an odder look than if you’re male and order a half pint. Or if you’re in Leicester and pronounce any French word in a French way.

That brings us to the next of my silly mini Cadenhead’s shopping spree,Auchroisk 1989 Small Batch 24 year. Auchroisk (pronounced “I-DON’T HAVE A CLUE”) is…