Today I post this to commemorate the closing doors of a distillery. The Toronto Distillery Co has been operating out of the Junction in Toronto since 2012 and has made some really interesting stuff over the years. In past posts, I’ve covered their gin, white whiskies, beet liquor, First Barrels at bottled ABV and at cask strength, as well as their Hickory Cask whisky at bottled and cask strength. We stopped by on Jan 21, one last time before this chapter in their journey comes to an end… sort of. Thankfully, they’ve got some future plans detailed in the Q&A  Jesse and Charles were kind enough to candidly answer, which are condensed here, but are posted in full in this post on /r/canadawhisky:

Q1:  A lot of people who get into distilling or brewing or some other crafty industry do it because they love their craft, but also because they have a bigger goal in mind, or statement they want to make. Is that true for you, and if so, what is that goal or statement for you personally?

Charles Benoit: Definitely set out with a goal in mind, and that was being part of the movement of discovering whisky terroir. Before we set up shop, it was impossible in Ontario to do something like compare a 100% rye vs. a 100% corn vs. a 100% wheat whisky, and understand what each grain brings when it hits a barrel.  “Terroir” is about more than just grain type, it’s also about the environment: soil, topography, and climate. We saw that first hand after distilling tons (literally) of soft white winter wheat all harvested from the O’Hara family farm in Schomberg, Ont., from 2012 to 2015. Our miller told us it’d be different from year to year as increased rain affects nutrient uptake in the wheat, and he wasn’t wrong, the affect is more pronounced than we originally thought. Eventually we’ll get to the point where whisky has a segment similar to estate wines, which will be tremendous not just for whisky fans who crave that knowledge and experience, but also for everyone who enjoys buying food & beverage from their community.

Jesse Razaqpur: For me, I think it started with a genuine passion for the craft and the product. We really wanted to make a fantastic product from local ingredients, in our own town. That was the whole point. As the Chief Distiller, I firmly believe we’ve accomplished that. As time went on, I think we learned a lot about just how unjust the regulatory system was, and sought to challenge some of those injustices. Though, of course, we disagreed with the court’s ruling in our case, we nevertheless accomplished a great deal in the regulatory field. So there is a sense of vindication in our position on the law. I also believe that going forward, other distilleries will benefit from some of these changes, and will be better positioned with more regulatory clarity than previously existed, and may be able to push for further changes when a new government is elected.

Q2: What is the biggest and/or most meaningful lesson you’ve learned as a result of this 5 year journey?

CB: Tough to pick just one! Here are some that float to the top.

JR:  Its unquestionably been a learning experience for me.  When Chuck and I started this journey, I knew it would be hard work, but had no idea how much work and how hard it would be.  It was also at times hard on personal relationships, as well as demanding on family and friends.  In particular I’m really thankful for all the patience and support I had from my wife over the years while we were building Toronto Distillery Company.  I’ve learned  a ton about running a small business, dealing with government, staff, suppliers, etc.  You have no idea what it means to truly be an Entrepreneur, the risk, and the effort until you’ve done it.   I’m also something of a perfectionist, and quality and details were something that always mattered to me a great deal, yet I’ve gained an even greater appreciation over time for how much work and dedication goes into developing a great product.  To do it right takes a ton of time, effort, and money but you have to do it that way to get it right.

Q3: Knowing what you know now, is there anything you would have done differently?

CB: Yes – we spent our first two years just distilling and bottling our unaged wheat spirit to fulfill LCBO orders, and that was a mistake. It’s a great feeling to see your bottle on the shelf and have that kind of volume of product (we couldn’t keep up), but maintaining that listing consumed all our time and resources without enabling us to re-invest in our distillery or get more involved in the community.Once we cut the unaged wheat listing, we were able to get back to our original mission of distilling various grains to explore whisky terroir, as well as develop whole new spirits like our J.R.’s Gin, Ontario Applejack, and our Beet spirit. That in turn made our distillery a much more interesting destination, and our tour business really grew.

JR: Undoubtedly there’s things I would have done differently with the benefit of hindsight (e.g. a bigger still would have been nice) but hindsight is always 20/20 and you have to look forward. On the negative side, my faith in this particular government to do the right thing in respect of distillery policy has been shattered. On balance though its been a hugely rewarding experience. All along the way we benefited from the support of countless individuals who truly believed in our mission, and wanted to see us succeed and be a part of the journey. Overall, I’m proud to say we’ve fought the good fight and stood up for what was right, all while achieving our aim of producing top quality products from local ingredients that our customers love – and that was the whole reason we got into the business in the first place.

Q4: What does the future hold for you and the Toronto Distillery Co?

Going forward, we’re extremely excited about the whisky we’ll be laying down, growing the Straight Canadian Whisky segment, and the fact that we’ll be able to contract distill with the new distillery we’re helping setup at 90 Cawthra as well as with King’s Locke in Prescott. Hopefully in a couple years we’ll have tax reform, and we’ll be able to open up our own retail store again, stocked high with organic Straight Canadian Whisky.

Then Jesse let us sample some stuff from their R&D shelf, and we got a literal taste of the innovative ideas they had tried over the past 5 years. My notes for each will be short and sweet, just giving a general sense of the different spirits with no scores for the most part. As we’ve seen in the past, Jesse likes to experiment with different grains. The first 3 are white whiskies made from a few uncommon Ontario grown, organic grains. Then there are a few non-whiskies made from other materials, and finally the Queen’s Own Cask, which is a crazy unique dram. 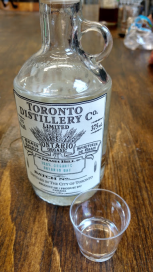 This oak whisky is really good. I have a bottle of Dixon’s Oatshine at home and this stuff blows it away. Way more flavour, grain forward, quite sweet. Really nice. incredibly distinctive from what you expect… none of the rye spice or smooth wheat notes… hard to describe something so different. Wish I’d been around when this was available for purchase in their early days!

The buckwheat smells very earthy… literally like soil. Tastes pretty spicy with a crazy earthiness. I can think of a few realy interesting cocktails that this would be really good in. He had a jar of the buckwheat grain too which was really cool and you can see in the pic. A bit sweet on the finish. Very interesting and different.

the spelt smells quite sweet, with some dark fruits. Very light bodied, and some sweetness, but much less flavour than the buckwheat or Oat. Rather short finish. Quite interesting again. I can see why this one wasn’t commercialized, as it isn’t as flavourful, but that could also be due to the lower ABV on this one.

no, i don’t mean like a pre-mixed can of CC rye and ginger ale, i mean a real liquor distilled from rye and freshly grated ginger! spicy ginger on the nose, spices and ginger on the palate… like a distilled ginger beer really. short finish. really interesting cocktail opportunities with this one.

the apple brandy tastes more like a schnapps or eau de vie. Really tasty. They had some bottles that they’d grown apples inside too… something to try in the future i think!

ethanol is quite forward on the sweet potato. I don’t get a ton of the veggie itself but it has an interesting anise flavour to it. definitely less veggie influence than the beet liquor. quite unique. 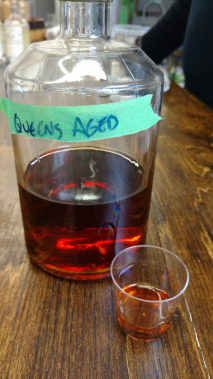 This was a random bottle I pointed out on the shelf that was crazy dark and asked what it was. Apparently, they did a distillation run of just feints (heads and tails) and then threw it in a barrel. Jesse

wasn’t sure how old it is, and didn’t know the proof until he
pulled out a hydrometer and found it
was around 51%. It’s entirely wheat and aged in a very small cask.

That’s ridiculous. So good. I would buy a bottle of that. . Thankfully, Jesse poured me a small sample to bring home and sit down with for further dissection!

So while we’re happy that these whisky innovators will continue to make whisky and other products, they won’t be doing it in their awesome location in the Junction. Our hope is that one day they can re-open within the city of Toronto when there’s a more conducive political environment, so they can continue their exploration of different grains, casks and processes. To Jesse and Charles, thank you for your contributions to the whiskyfabric, to the city and to our little whisky society as well, taking us behind the scenes and being open with your product, process and plans for the future!

One thought on “Distillery Down… sort of; Toronto Distillery Co closes its doors but opens its R&D shelf and shares its plans for the future”