When we launched the Toronto Whisky Society, one of the goals was to try new whiskies and provide honest, unbiased feedback on them. Our members have been doing this for quite a while now on Reddit, with over 2000 reviews posted collectively on the network. We soon found that distilleries are eager to get word out about their products and that our group is a means for them to do that, and we’re eager to help in that regard, with the caveat that we’ll only ever be honest and not allow free samples or bottles to influence our evaluations. Liberty Pole Spirits is one of those distilleries that wanted to spread the word, and to date, hadn’t gotten any third party feedback on their spirits, save for those who came to taste them at the distillery. They sent us these samples which we distributed to our most seasoned reviewers. They do triple distillation on most of their whisky using a 300gal copper pot still (non-hybrid), and use locally sourced grains. Most of these have been aged in very small barrels with a #3 char for only a few months, though they’re planning to increase the size of barrels and the time spent in them very soon. They indicated their heart cuts are very conservative to offset the lack of aging time.

Disclosure: We received these samples for free from the distillery with the understanding that we’d be posting reviews without regard for where the samples came from. Liberty Pole Spirits agreed to these terms. 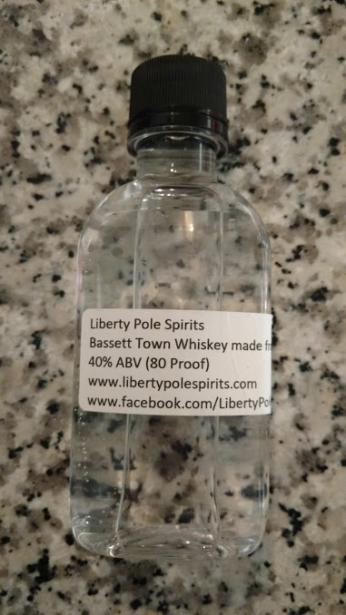 This dram was reviewed by 7 of our members and is a white dog called Bassett Town Rye Whiskey that has an interesting mash: 61% Rye, 13% Wheat, 13% malted Rye, 13% malted barley as its base, and apparently thrown in a barrel for less than 24 hours so it could be officially called whiskey. it’s bottled at 40% ABV.

Not going to score a white whisky, as it’s not an apples to oranges comparison. Overall, not the worst white whisky I’ve had, but the nose is definitely better than the palate.

It is a white dog, I have only had a few and really they do not compare to matured whiskey well. I have certainly had worse white dog, I like the Buffalo Trace white dog better from memory.

Probably not fair to rate this, but it was not too bad, with the nose being the best part for me.

Liberty Pole Bassett Town Whiskey is earthy with strong grass, hay, and sawdust notes. A surprising strawberry liquorice note provides an interesting fruity component. For a new make, the alcohol bite is surprisingly mellow. I’m not a big fan of white dog spirit in general, and this certainly isn’t something I’d sip, but I appreciate the chance to try an important piece of the foundation of the whiskey. Certainly rather earthy and unique compared to most other new make spirits I’ve tried.

I’m not sure it would be fair for me to really rate the white dog, since I have no basis for comparison. I have not ever tasted, let alone reviewed, a white dog before (or any unaged whisky). So for this one, I am going to omit the score and let my general impressions have the final word. If the white dog is anything to go by, I expect the next two are going to have a heavy dose of the barnyard/grainy elements.

Conclusion: I’ve since decided to stop ranking white dog recently. I appreciate this for what it is: It gives me a cool idea what the initial spirit tastes like before trying the rye. It is very farm forward, which is different from other bourbon’s I’ve had. The triple distillation is quite interesting as well.

Very pungent on the nose… like a cross between Sambuca and a farmyard. The taste is grainy, a little sweet and spicy. Finishes similar, but with a mild wood influence and earthiness to it. Drinks like a diluted version of the nose, but thankfully the flavours marry up better here and actually become fairly manageable.

Well I’m awake now… definitely not used to that. If you can get past the nose (it took me a long while… but I hate Sambuca) the taste and finish are mellow and quite unique. Having never tried anything like this before, it’s educational. I’m curious to see how the base spirit is impacted by wood influence and age.