A few months ago, the founding members of the Toronto Whisky Society were discussing what we should do to celebrate Canada’s 150th birthday, and eventually the discussion came around to whisky awards. When we looked at these awards, we found that they don’t always reveal the full list of whiskies evaluated, and generally don’t evaluate up-and-coming distilleries with product under 3 years old.

Canada has a ton of small, young distilleries in all provinces, and we saw an opportunity to help bring awareness to them and help promote Canadian spirits. As a group, TWS has about 2500 whisky reviews online, but had never done a large head-to-head review event like this. We reached out to distilleries, large and small, and asked if they’d like to participate. About a dozen responded and sent in a total of 15 sample bottles for us to try. We separated them into the following four categories (not without some debate as some fit more than one category): 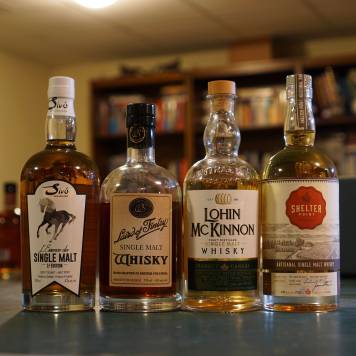 Each category will have results posted over the next week, and will include the collective tasting notes and comments on each bottle. We’ll also give a collective ranking of that category, derived by averaging reviewers’ individual rankings.

As we value transparency,  our tasting notes are unedited, honest and straight-forward, and we exclude no bottles from the final evaluations. This means some commentary may be unflattering, but we believe the consumer deserves an honest look at these spirits, and hopefully our feedback is taken constructively vs critically.

This is far from a comprehensive look at the Canadian whisky/spirits landscape, but we hope that fans of Canadian whiskies and spirits find some value in these tasting notes and rankings, and seek out some of the lesser-known distilleries we’ve showcased!

We plan on running this event annually, so if you’re a small Canadian distillery that has whisky on the market, or is just starting up, feel free to reach out via our contact page to discuss how you can be included next year!

Time for a Monday night dram, today I selected the Nikka Yoichi Apple Brandy Wood Finish.
If you are a Mortlach fan this bottle is a great value. The Carn Mor 2010 in a sherry butt has a ton of character.
It's time for some mid-week Mortlach!
One of the highlights of travel is checking out new distilleries with whiskies in progress that you otherwise couldn't try! @thenewfoundlanddistilleryco has been around for about 4 years and focussed on white spirits at first, laying down their first whisky barrels 6-8 months ago. With a focus on using local grains from NL and the Maritimes, they're making Irish style, triple distilled single pot still and single malt whiskies, and using virgin oak casks for the first half a year to put their own twist on the style. As the first distillery to make whisky on the Rock (as opposed to sourcing it), they're trying to define what Newfoundland whisky is, and so far the results are delicious! Looking forward to seeing how it develops over the next few years. See our website for more pics and details!
It's a rainy weekend by the lake, that calls for a Ledaig. Today it is the new Gordan & MacPhail 2008 Ledaig, aged in sherry and finished 3 years in Hermitage.
Leaning heavily into the military and hockey themes, @howitzerwhisky is a newer whisky brand in the Canadian market that aims to be a people pleaser. It's sourced, 5years old, and mostly corn with a splash of barley. At 40% it's not gonna kick you in the mouthguard, but mixed nicely with the maple chili syrup they gifted with the bottle! It's a bottle designed for mixing or possibly sipping while watching the Canadiens get swept tonight by the Lightning!
My Tweets