So I’m at the precipice of hitting both 300 scotch reviews and 500 total whisky reviews on reddit and plotted out my path to those milestones. Inspired by /u/tomodera‘s recent Arran-pocalypse posts (Part 1, Part 2), I decided to do a smaller multi of the Arran drams I haven’t posted here in the past. It’s kind of like the B-movie version of his post… it’s Piranha to his JAWS, Carnosaur to his Jurassic Park, Dumb and Dumberer to his .. Dumb and Dumber.

full disclosure: I’m an arran fanboy, and absolutely love their stuff. With these 5, Arran becomes my most-reviewed distillery with 19 total, and one of my highest rated on average. Take these as you will, but I love Arran, and can’t wait to visit the Island again one day when their second distillery is open!

These will be posted in chronological order of when I did the reviews, some dating back to 2014!

I’m at my fiancee’s uncle’s place for Christmas and he knows I’m a scotch fan. We geek out over a few drams we enjoy and pulls this off the shelf after having it on his shelf for 5 years, having bought it at the distillery in Scotland. This is the Arran Malt Cask Strength single barrel, bottle 196 of 484. Aged in bourbon casks and then finished in Cognac barrels!!! never seen that before and i was ridiculously excited to try it! Bottled in 2006, it doesn’t say when it was distilled so I’m not certain of the age. Cask strength, non-coloured

incredible dram. I like sherry finishes but this was amped up to 11. absolutely delicious. He paid $160 for it in Scotland and there’s really no chance of me ever finding this again. Hopefully I’ll find a chance to go back to his place and have some more sometime!!

This bottle he had open already and poured me a dram after the Cognac had disappeared. Needless to say, my expectations were high after that first Arran! It was also bottled in 2006 but doesn’t have a distillery date, so again, age is unknown to me. It was in Oloroso sherry casks for most of its life, and then finished for a while in Gonzalez Byass cream sherry casks for a time until bottling in 2006. Bottle 807 of 812.

not quite as amazing as the cognac but still delicious. Particularly impressed by their experimentation with different finishes. I love Amarone wine, so I might try to pick up a bottle of the Amarone finish sometime!

Oh look, it’s the Amarone Finished Arran! I received this in a swap with /u/kinohead, my Canadian compatriot and future TWS member. We met up for a pint at a pub in toronto and exchanged samples after. As a fan of Arran malts, particularly some of their unique finishes, I’ve been excited for this one for a while.

I enjoyed this one quite a bit, but it wasn’t as good as the cask strength finished ones I had at Christmas. I did enjoy it slightly more than the 12 year cask strength batch 1 though.

Looks like it’s time for another crazy finished Arran. I’m at the Poacher’s Pub in Burlington, Ontario, and give the Arran Pomerol Bordeaux finish a try. I’ve had a few Arran malts lately and all have been delightful, and I love a nice wine finish, so I thought I’d give it a shot. 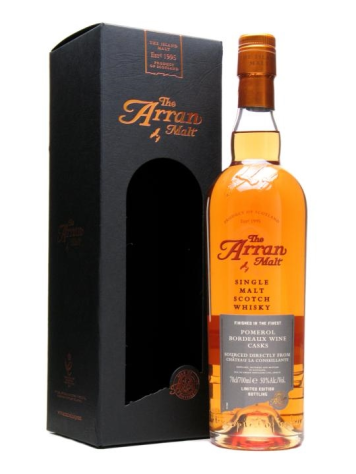 very nice dram. again, not as good as the cask strength bottles I tried at Christmas, but very nice bottle with a great cask finish.

the next one I picked up as a housewarming gift for a buddy and he generously shared some with a few of the guys. I’ve been a big fan of all the Arran malts I’ve tasted (see list below) and was excited to try another from their cask finish series. 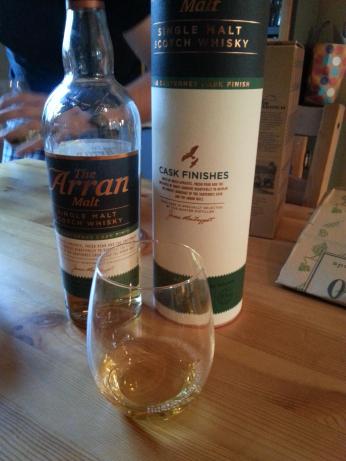 this bottle is my least favourite of all the Arrans I’ve tried so far. It was nice but fairly straight forward and tastes a little bit immature. I think it would benefit from a few more years of aging. Tasty dram but I wouldn’t buy it for my own collection.

The next is a bottle split a few of the guys in the GTA did.  This one is an 18 year (2 months away from 19) single cask sherry hogshead bottling for Kensington Wine Market in Calgary. bottled at 53.7% ABV.

I like this a lot more with a bit of added water than without. It balances sweet fruit with dry sherry and oak very nicely and demonstrates again how nicely Arran spirit takes to different cask influences. Another solid dram from one of my favourites.

In November 2016, shortly after the founding of TWS, a bunch of us were at Devoz’s house for a tasting. one of the drams was this bad boy. good ol SMWS, and good ol Arran. Ex-bourbon casks at cask strength.

not my favourite Arran, but it’s nice. I find Arran takes on a finish or strange cask so well, that a non-finished Arran just isn’t as good. glad I got to try it, but reinforces that non-ex-bourbon Arran is the best arran.

For the first I’m at /u/devoz house and he wanted to share this dram with me. I couldn’t do a proper review at that point, but he poured me a sample of this so I could add to my review series. It’s a Keg ‘n Cork store pick single cask sherry hogshead release at CS, and I love doing another single cask from the same time period to compare! 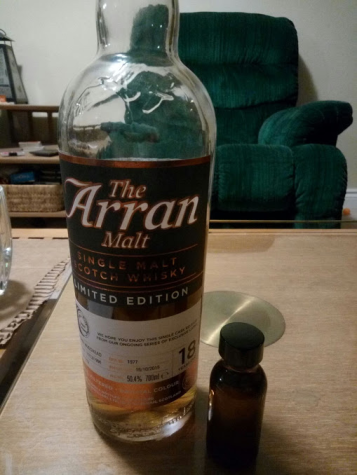 I have to suspect this was an oloroso sherry cask rather than PX or something sweet. It has that rich tannic leathery character that I love. I actually prefer this to my KWM single cask by a decent margin. Rich flavour, fantastic nose, long finish. Good pick Keg n Cork!

This was another great release from Arran and it does showcase the cask nicely. I suspect the sherry was a sweeter one and the tropical fruit and oak was nicely balanced. Great pick Carn Mor!

I got this in a swap with /u/devoz while at his place drinking. My bottle of the Laddien Ten second edition had arrived so we did a quick sample pour of that for this! It’s the Vol. II release from the Smuggler’s Series, and is a peated whisky aged in rum casks and first fill bourbon, bottled at cask strength. 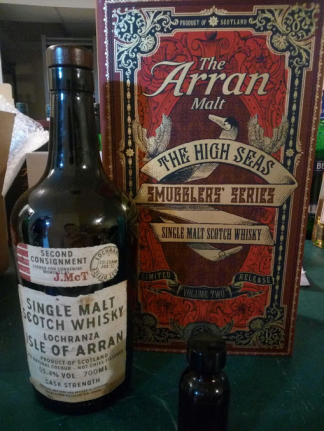 this is a large departure from the previous two in both profile and overall quality. It has some interesting depth and complexity, but is a little disjointed and chaotic. Guess that’s what you get on the High Seas. Definitely reinforces that Arran needs sherry casks.

I received this one from /u/UncleBaldric in a very generous giveaway contest he held on /r/scotchswap. When I signed up, I didn’t realize how exclusive this malt was! This is a members-only single cask bottling chosen by White Stag club members in 2015. It was distilled in 1997 and aged 18 years in sherry hogshead (oloroso apparently). the cask got 214 bottles out of it. Super excited to compare this to the other 18/19yr bottlings I’ve tried from Arran. 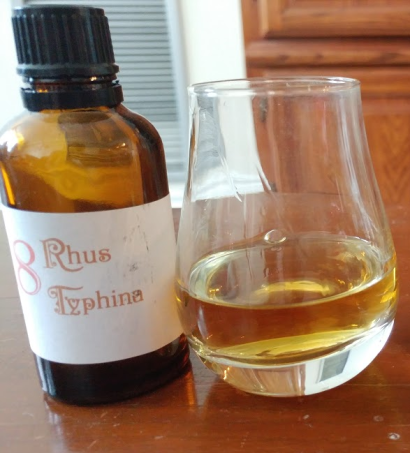 I’ve had a lot of nice Arrans in my day and this is definitely one of the best. Fantastic choice by the White Stag community. I’ll keep applying to be part of the tasting panel each year and hope one day to contribute a choice as good as this one!

At devoz’s house for a tequila mystery flight that I got through a guy on /r/tequila and tomodera and /u/boyd86dropped by to do some bottle dropoffs and splits. At the end of the tequila flight (and some mezcal) he pulled this out and said we’d finish with a bang. It’s a mix of 19-21yr ex-oloroso hogsheads. hot damn. Arran + 19+ years + Oloroso? I think i might like this one!

this is oloroso matured whisky at its finest. Nutty, some sweetness, but not over-powering either. The spirit shines through and is perfectly complemented by the cask. Damn. Just fantastic.

To the folks at Arran, keep doing what you’re doing. Can’t wait till you open your second site, and i’ll be back there in a few years to check it out. Keep experimenting, trying new crazy casks and pushing the limits, because you’re at your best when you do!

One thought on “Arran-mageddon: 12 reviews of Arran single casks, LEs and crazy finishes”