Visited Craft Distilleries on my Birthday weekend this year. I did reviews of them. They are the future, IMHO. We’re all good? Great.

Oh, and it was in Western New York.

I walked into Finger Lakes Distilling with much happiness and joy. It was a busy, busy place. Spirits were laid out. There were even ex-bourbon barrel chunks to be bought. Newspapers that were laminated were placed on the wall. An ex-cask of the current single cask was sitting out and people were taking pictures of it.

I could look past a window and see both the 25 foot continuous still and what I think was a hybrid still.

I was so excited to get to the bar that I forgot to ask any questions about the distillery. And for that I apologize, to both you the readers and to the distillery, because I could write more than what I gleamed in great conversation with your amazing staff.

The main product sold by Finger Lakes Distilling is Whiskey. While they have a shoju (calm down /u/muaddib99), vodka, various flavoured products, and a gin or two.

The standard for their whiskey is to aged in 53 gallon barrels that were made with 36 month, air-dried staves from Missouri. All of their whiskey is aged at 100 proof, which is interesting. They state it picks up different flavours than typical whiskies.

That’s not always the case though, as their single barrel must have gone in at a higher proof, given the exiting strength. I am guessing this is a new method that they are trying out.

Not to mention they make whiskey in both the American and Irish way, as detailed below. It’s nice to see someone trying different things in North America, as I think that changes up the process.

So suffice to say, this is a fun place to visit, with smart staff. But what about the whiskey? I mean, they are hamdmade and un-chillfiltered, but you came here to read about them, not all my trip.

Oh, and they have Glencairns for tasting. Take note other distilleries. 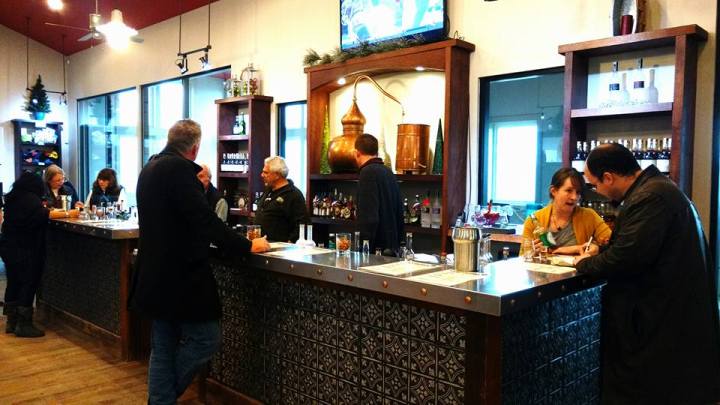 McKenzie Pure Pot Still is up first, because I’m writing about Bourbon, so I should start with an Irish style whiskey. Because it’s the internet and I’m “random”.

If you didn’t read that as sarcastic, I feel bad for you son. I got 99 problems, but quoting songs in odd context ain’t one..

Fun fact: They add in oat to add a smoothness to this one. Or at least that’s what I remember while going through the different samples. I’m still stoked to try it.

Nice amount of mint and honey. For a low Abv., young product, this has a lot on the nose. There’s no yeast elements, which is nice here. No overwhelming amount of dough.

I didn’t find out if they did a triple distillation on this or not. Probably should have. None the less, nice nose.

Again, nice amount of sweet, minty notes on the taste. It’s a tad dry, but not enough to throw me off. Coconut comes out given time.

Short finish. Lots of earth. Somewhat hot. The finish is where the young age pops up on this one. It’s the one place where I want it to be older.

Conclusion: Ha! I made you, a person interested in American whiskey, read about an Irish style whiskey! My insane plan has come to fruition!

Well, now that that’s out of the way, let’s talk about this whiskey.

By using Irish techniques Finger Lakers have made an interesting unique whiskey. It’s not an American aping Irish trends (see: St. Patrick’s Day) and it’s not an Irish whiskey (per say) that happens to be American. It’s new, different, and something I’d love to see aged more and more. This has the ability to be a unique offering.

A yeast-less Irish. Someone alert the press.

McKenzie Rye Whiskey is up next. Done very similar to other ryes, this one isn’t just another 95% rye that was aged in new oak and slammed out too early. Instead it has a finish in ex-Sherry casks.

One thing to note: When I say ex-Sherry, I don’t mean Sherry from the places we’re used to. This isn’t an Oloroso or Pedro Ximenez cask. Instead this sherry style wine comes from local wineries. Or rather the barrels do.

So we have a blend of young ryes, the youngest being 2.5 years and the oldest being 5 years. I like Sherry casks. I like Rye. This should be fun.

Lovely nose, just in time for the season. It’s a ton of spice. Some brown sugar, no real red fruit notes (only 6 months, after all, and the sherry may be lighter).

Definitely has the spice side of the rye, that’s for certain.

Wait, I thought I wasn’t going to mention dough? Did they take it from the Irish and put it here? I’m confused.

Interesting taste. A little light. Like most ryes I run into, I prefer them older. This applies to women too.

Enough jokes in this paragraph. This is lighter than I’d prefer. Sadly.

Nice finish. More smoke than I was expecting, with big butterscotch. I think this is where the sherry cask comes in more, as I don’t typically attribute any of these flavours to rye.

Conclusion: This is the start of a Frankenstein’s monster I think. It has the nose of a rye, the taste needs work, and the finish is some odd Highland / High heat mash whiskey.

I like where they are going, however as with a lot of rye, it’s going to take longer than most people are comfortable with (from a capitalism sense). I hope they keep it up and keeping adding to the age. 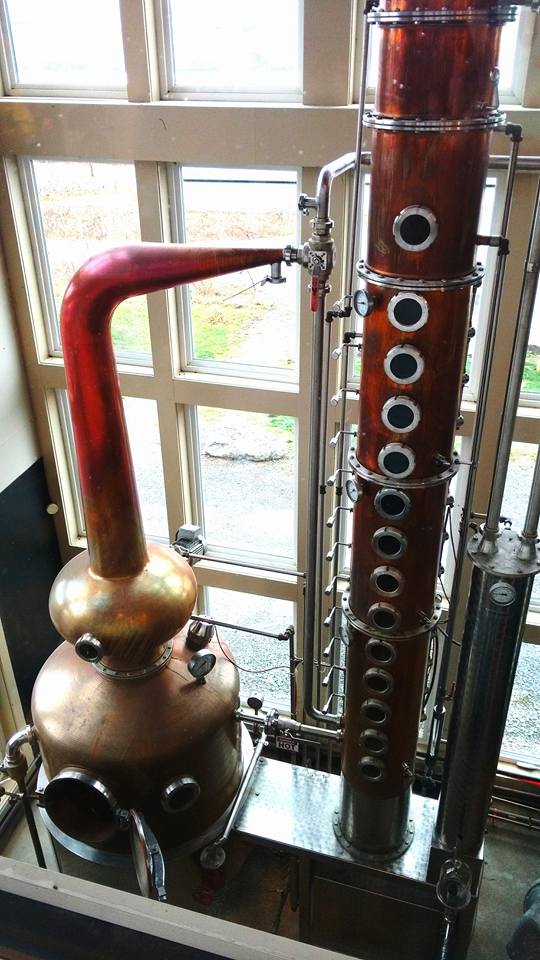 And I didn’t even note that it was finished in chardonnay casks from the local wineries. Where is my head?

Let’s see how this tastes, shall we?

Nice nose on this one. There is a rough note, right in the middle of it. And I mean white glue, not airplane glue. Which would be good for some people? It’s a rough note.

Like the other flavours. The sheer amount of butter is really nice.

Sweet. Good amount of spice here too. The rye has mellowed into a nice ginger flavour.

May not be for someone who doesn’t like sweets. All you skinny people. I shake my head at you.

More butter. It’s like my heaven. Or whatever afterlife my bad eating habits are driving me towards.

Good amount of orange. I’ll chalk this up to the rye influence again. Liked it quite a bit, though still short.

Conclusion: Nothing overly complex. The taste and finish had no off notes, which as I’ve said before, seems to be a trait of WNY whiskey. Liked the amount of orange and the sweet taste. I think this is developing nicely in the cask. 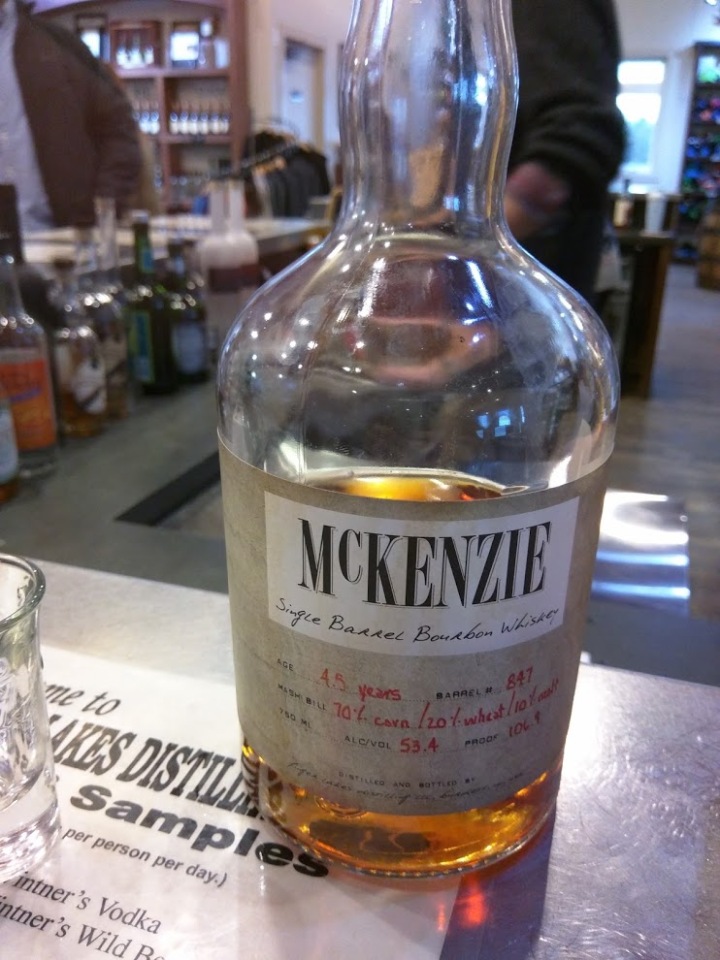 McKenzie Single Barrel Bourbon is the current special single cask, released close to when I visited the distillery.

One thing I forgot to ask: This has an entry proof of 100, but exits at 106.9. What I’m thinking is the two different proofs are run by the UK and US system.

But I was just really excited to try this and forgot to. Also was talking whiskey with fellow whiskey nerds and distracting them (momentarily) from other customers. 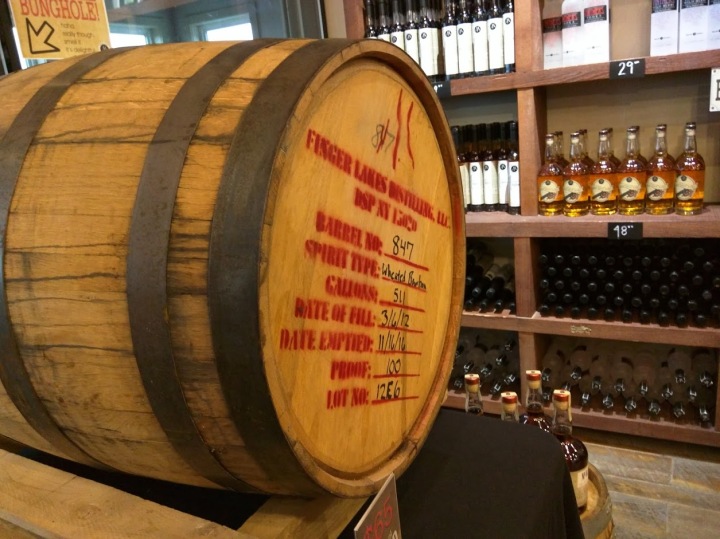 Price: Can’t remember, may have been drinking.

Big hit of vanilla. This was a very active cask.

Spicy, still shows it’s age a little, but has some nice fruit to flesh it all out. No longer dry, which is an odd change. More butter. Fatty (me) loves butter.

Conclusion: This is a very, very interesting single cask. It’s developed a lot of notable flavours in it, has some really nice spice, and finishes with butter.

My favourite of this distillery. Really tasty. If they can eventually release things that exceed this on a regular basis, they’ll make a name for themselves outside the craft scene easily. Really nice whiskey, and really great overall.

What is in your glass this weekend? Cracked open the 2019 George T Stagg and really enjoying it. Massive amount of leather, oak, brown sugar, spices and tobacco. #georgetstagg #btac #btac2019 #gts2019 #georgetstagg2019 #bourbon #bourbonporn #bourbongram #instabourbon #buffalotrace #whiskeygram #whiskeytasting #whiskeyporn #torontowhiskysociety #torontobourbon
Happy World Whisky Day! Looking back on the past year this dram was definitely a highlight. This is a 10 year old single cask version of the @bruichladdich Octomore 6.3 Revenant that was offered at the Bruichladdich Warehouse Tasting that I actually valinched myself! It was a great moment that I wish I could do again, but until the quarantine ends it'll be a little while until I can make it back. But I will be back for sure to support this great distillery (who are currently co-producing sanitizer for Islay residents) once things are more back to normal! #whisky #scotch #singlemalt #singlemaltscotch #scotchwhisky #singlemaltwhisky #singlemaltscotchwhisky #whiskyporn #islay #peat #singlecask #whiskygram #bruichladdich #octomore #worldwhiskyday
Opened some bottles for the long weekend, three different octave releases from Duncan Taylor. A combination of peated BenRiach, peated Ardmore and unpeated Ardmore. For those that don't know, octaves are small casks typically used for finishing whiskies. Needless to say tons of cask influence. #duncantaylor #theoctave #singlecask #indepententbottler #peatedscotch #sherrywhisky #benriach #ardmore #caskstrength #scotchporn #scotchgram #scotch #instascotch #instawhisky #torontowhiskysociety
Poured a dram that reminds us of mom: Floral notes because she likes them; mineral notes cuz she's solid as a rock; 17yrs cuz she's a kid at heart; cask strength because she's powerful; salty cuz she sometimes is too! Then we let it sit and evaporate a while for all the moms who are enjoying the Angel's share. So here's to you, mom; Happy Mother's Day. . . . . . . #whiskytasting #whisky #whiskeytasting #Whiskey #scotch #singlemalt #limited #scotchgram #instascotch #instawhisky #torontowhiskysociety #torontowhisky #happymothersday #mothersday
Last night we had a zoom hangout to share a dram of our most recent TWS custom bottling and some others from our whisky shelves. 4 hrs later, we had done a good number on those shelves! Looking forward to our next hangout! . . . . . . #whiskytasting #whiskyporn #whisky #whiskeytasting #Whiskey #scotch #singlemalt #limited #scotchporn #scotchgram #instascotch #instawhisky #torontowhiskysociety #torontowhisky #luxury #whiskeyporn
On a Campbeltown kick, opened up the new Longrow Red, 13 years old that is finished in Chilean Cabernet Sauvignon. Wonderful fruit notes to complement smoke, raisins, oak and chocolate. Every year the Longrow Red releases impress. #longrow #campbeltown #longrowredcabernetsauvignon13 #scotch #peatedscotch #caskstrength #whisky #scotchgram #scotchporn #whiskeytasting #instascotch #torontowhiskysociety
My Tweets