When one says The Balvenie, there’s one of two reactions: Either you enjoy the floral, sometimes fruity Speyside, or you pass. I am of the first group, so when I was invited (in addition to other members of the Toronto Whisky Society) to a Balvenie tasting at The Caledonian, of course, I cleared my schedule. Heck, I may have gone so fast that I cleared three other people’s schedules too.

The night was hosted by not one, not two, but THREE of The Balvenie’s Brand Ambassadors. Now I know what you’re thinking: What’s the difference, right? Well, I want you to take a moment here. A rough whisky tasting is the one where the presenter doesn’t flow that well. We’ve all been at them, and it’s awkward. This evening we were lucky enough to hear from three great presenters.

Perhaps you’re good with anyone speaking to you while you drink whisky. That’s fine. You’re probably thinking: What was in the glasses? Well due to a DHL/Customs issue, the lineup was supercharged.

We were lucky enough to have Jamie Johnson (Canada’s brand ambassador) run us through a tasting before. As usual, she was bubbly, informative, and fun. You may have heard her on The Whisky Topic podcast before, or been lucky enough to have met her. She started us off with old Faithful Balvenie DoubleWood 12, and then immediately tried Balvenie DoubleWood 25, a one time release celebrating the 12 DoubleWood’s 25th year on the market (how times flies when we’re drinking scotch).

Then we had Ross Blainey, who normally runs the Australia and New Zealand scene, go through the peated offerings, giving us stories of pranks, and a general warning that peat may smell great in a kiln, but doesn’t translate as well to a microwave. Ross introduced us to The Balvenie Home/Home. Never heard of it? Find the packaging a little lacking? Well, it’s not out yet (he says hopefully, with Balvenie not having plans to release it at the moment). Balvenie is still working on a whisky made with 100% of their own malted barley, and this 7-year-old single malt still needs some work. To even out the spicy peated offering we tempered ourselves with the Balvenie 14 Peated Triple Cask, a travel exclusive that’s had more time to balance out nicely.

Then finally Balvenie’s Global Brand Ambassador, Gemma Louise Paterson, who finished off the night with stories of the secret behind the flavour of 1963 Balvenie offerings, David Stewart’s puckish side, and more. Gemma shared not one, but two of the DCS compendium whiskies from Chapter 4, the Unusual Casks. You know, those everyday drams (is there a font for sarcasm?) 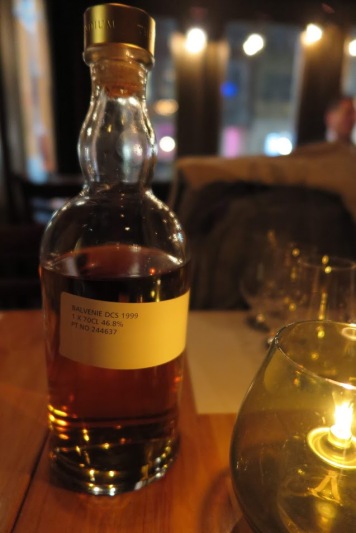 The final surprise of the night was when Jamie bought a dram of The Balvenie Classic from the 80s and shared it with a few of us! It’s an 18yr bottling and was one of the first times the Balvenie used sherry casks to finish a whisky. It was more viscous and had an almost brandy-like character, while still showing those characteristic honey notes you expect from the Balvenie. They still have part of a bottle left at the Caledonian if you want to try it!

Want to know how the full line-up tastes? We’ll be posting reviews, however, amongst the Execs and members who came out Balvenie 1982 DCS Chapter 4 was a clear winner.  Any time you can have a Balvenie at cask strength, go for it!

One thought on “A night of Balvenie”

GIVEAWAY ALERT! Gooderham & Worts is #homefortheholidays at the historic @distilleryto and holding master classes with @spiritofyork hosted by the venerable @davemitton! We have a pair of tickets to give away to someone ($150 value) for the class on December 12 at 7pm. Tickets also give line and ticket bypass to enter the holiday market at the district. To enter:
Happy Thanksgiving to all our American friends!
The lowland that got away... This Rosebank 12 from The Distillers Agency was bottled in the mid 80s and originally sold for just $25.99! It's worth a tad more than that these days...
Christmas came early - really looking forward to enjoying the new @amrutmalt Spectrum 004.
Pleasantly surprised by this young rye from @spiritofyork! When I visited them upon their opening years ago, the sourced juice they were serving really wasn't great, but they've managed to make a fantastic 3 year rye in Toronto's historic Distillery District.
I’m dreaming of a Whiskey Christmas!
My Tweets