On a recent trip to Nova Scotia, my wife and I drove the Cabot Trail on Cape Breton and made a stop at the Glenora Distillery for a tour and tasting. I write in detail about the distillery and its history here, and have included this post to cover the reviews we did of the drams we tasted. Previously reviewed Glen Breton bottlings can be found here. We started at the beginning, with the new make.

Overall, the new make was fairly pleasant for an unaged spirit. It was pretty typical of malt new make with a bit more grass and less ethanol flavour.

This bottling was the first sub-ten-year bottling Glenora made, released in honour of John MacDougall, a fiddler from Mabou who composed nearly 40,000 fiddle tunes, and often performed in Glenora’s restaurant before his death in 2008. He loved Glenora’s whisky as much as they loved his music, and this approximately 6 year old bottling is a fitting tribute to his memory.

Incredible body and depth for a 6 year old whisky! At $60 this is a steal. We would have picked up a bottle for sure if not for the purchase we actually made. Fortunately, this can be ordered direct from their website!

This is another special edition release in honour of Alister Mackenzie, a links-style golf course designer from Cape Breton.

This is an interesting one. That Play-Doh note is strange and the vegetal notes are amped up to 11. Some will love this, but it’s not quite up my alley.

This is a triple gold winner for Glenora, and their Master Distiller, Daniel Maclean felt it hit its peak and needed to bottle it.

I can see why this won awards. It’s a very light and delicate spirit, but a gorgeous and deep single malt that beautifully balances the grain, yeast and oak influences.

This is their standard 10 year malt finished in Jost Vineyards Icewine casks. This is a reciprocal arrangement, as Jost also finishes their icewine in whisky barrels!

This has the same soapy note I’ve tasted on other ice-wine finished whiskies from Glenora. Sadly it seems either the spirit doesn’t take to the casks well, or there’s something in the Jost icewine giving it that soapy character.

While we were in the warehouse Bertha, the Inn Manager, opened up a cask and drew some whisky straight from the barrel for us. We sampled a bit of it there in the warehouse of course, but saved the rest for tasting during the flight. This is cask #14 from 1997. 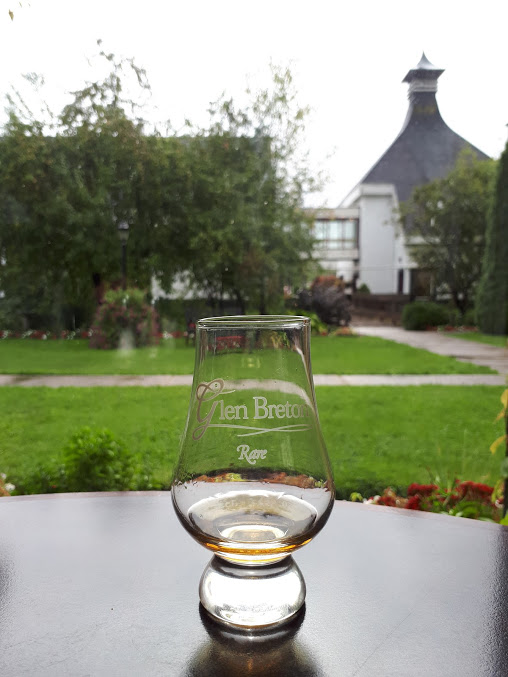 If it weren’t for that same Play-Doh note again, this would be an incredible dram. It still scores well though and there’s a ton of flavour at high proof.

This single cask is #122 from 1995 and is ex-bourbon again. This was available for purchase in the gift shop, and you could draw your own 250 or 750ml bottles.

Couldn’t decide between the two single casks which one we liked better. this one had a bit more depth, but the other was a bit cleaner.

This malt is an anomaly from Glenora: a peated single malt. In 2004, Glenora ordered some malted barley from Saskatchewan, and when the shipment arrived, they discovered it had been peated. Rather than deal with getting a second shipment and risk some of the distilling season, they made whisky with it and laid down the barrels, in the hopes that it would turn out well. Thirteen years later, they found a spirit that had peaked and turned out very well in their opinion. They bottled it under the name Ghleann Dubh, which is Gaelic for “Dark Glen,” a reference to their location on the West side of a deep valley, leading to it getting dark very early. This malt was peated with Canadian peat, not Scottish, and we were excited to see what impact that had on the flavour.

What a wonderful accident! This dram redeemed my opinion of Canadian peat, and now I really hope more distilleries experiment with it! This rates among the top Canadian whiskies I’ve reviewed.

In their wisdom, Glenora realized they had something unique on their hands with their peated whisky and saved a single barrel (#147) to sell at cask strength. This was the last dram we tried for obvious reasons.

This is officially the highest rating I’ve given a Canadian whisky, even edging the Lot No. 40 Cask Strength by a point.

We both loved this, the depth of flavour, and the way it evolved with a few drops of water. This is proof positive that Canadian peat can create an incredible whisky that competes favourably with many peated scotches. We decided to buy a 250ml bottle of this as a special occasion dram, even though that small bottle cost $100 CAD. We also got to draw it direct from the cask ourselves which was an added bonus. Glenora should probably look into ordering some more peated malt, this time on purpose!

If any of these reviews pique your interest, be sure to check out Glenora’s web store, as they ship across Canada!

What is in your glass this weekend? Cracked open the 2019 George T Stagg and really enjoying it. Massive amount of leather, oak, brown sugar, spices and tobacco. #georgetstagg #btac #btac2019 #gts2019 #georgetstagg2019 #bourbon #bourbonporn #bourbongram #instabourbon #buffalotrace #whiskeygram #whiskeytasting #whiskeyporn #torontowhiskysociety #torontobourbon
Happy World Whisky Day! Looking back on the past year this dram was definitely a highlight. This is a 10 year old single cask version of the @bruichladdich Octomore 6.3 Revenant that was offered at the Bruichladdich Warehouse Tasting that I actually valinched myself! It was a great moment that I wish I could do again, but until the quarantine ends it'll be a little while until I can make it back. But I will be back for sure to support this great distillery (who are currently co-producing sanitizer for Islay residents) once things are more back to normal! #whisky #scotch #singlemalt #singlemaltscotch #scotchwhisky #singlemaltwhisky #singlemaltscotchwhisky #whiskyporn #islay #peat #singlecask #whiskygram #bruichladdich #octomore #worldwhiskyday
Opened some bottles for the long weekend, three different octave releases from Duncan Taylor. A combination of peated BenRiach, peated Ardmore and unpeated Ardmore. For those that don't know, octaves are small casks typically used for finishing whiskies. Needless to say tons of cask influence. #duncantaylor #theoctave #singlecask #indepententbottler #peatedscotch #sherrywhisky #benriach #ardmore #caskstrength #scotchporn #scotchgram #scotch #instascotch #instawhisky #torontowhiskysociety
Poured a dram that reminds us of mom: Floral notes because she likes them; mineral notes cuz she's solid as a rock; 17yrs cuz she's a kid at heart; cask strength because she's powerful; salty cuz she sometimes is too! Then we let it sit and evaporate a while for all the moms who are enjoying the Angel's share. So here's to you, mom; Happy Mother's Day. . . . . . . #whiskytasting #whisky #whiskeytasting #Whiskey #scotch #singlemalt #limited #scotchgram #instascotch #instawhisky #torontowhiskysociety #torontowhisky #happymothersday #mothersday
Last night we had a zoom hangout to share a dram of our most recent TWS custom bottling and some others from our whisky shelves. 4 hrs later, we had done a good number on those shelves! Looking forward to our next hangout! . . . . . . #whiskytasting #whiskyporn #whisky #whiskeytasting #Whiskey #scotch #singlemalt #limited #scotchporn #scotchgram #instascotch #instawhisky #torontowhiskysociety #torontowhisky #luxury #whiskeyporn
On a Campbeltown kick, opened up the new Longrow Red, 13 years old that is finished in Chilean Cabernet Sauvignon. Wonderful fruit notes to complement smoke, raisins, oak and chocolate. Every year the Longrow Red releases impress. #longrow #campbeltown #longrowredcabernetsauvignon13 #scotch #peatedscotch #caskstrength #whisky #scotchgram #scotchporn #whiskeytasting #instascotch #torontowhiskysociety
My Tweets