The Toronto Whisky Society had their first event of 2017 last night, and we had 16 people out at the Feather’s Pub to do a custom flight. It was a lot of fun meeting some of our new members, as well as having special guests out, including Mark Bylok, Author of the Whisky Cabinet and the WhiskyBuzz podcast! Special thanks to Reid at Feather’s for sorting out the menu with us, and to tomodera for pre-tasting and introducing each of the drams.

The first one of the night was an IB Bladnoch, distilled in my birth year, and the highest proof dram of the night. I haven’t been blown away by lowlands in the past, but was open to something at CS being a pleasant surprise. 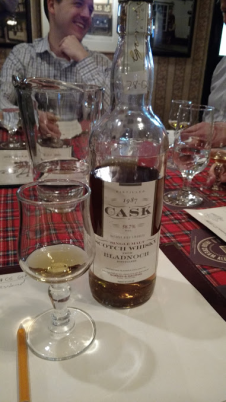 a pleasant dram, but kind of boring

Next is a Clynelish IB from 1983, also CS. I’ve had two Clynelish in the past. One didn’t impress me at all, and the other one blew me away, so I’m not sure what to expect here! 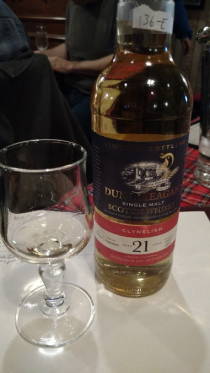 nicer than the bladnoch, but still didn’t blow me away. Sort of in the middle as far as my Clynelish experience has been.

Mortlach is up next with a respectable ABV and a ‘fresh sherry cask’. Doesn’t say what kind. 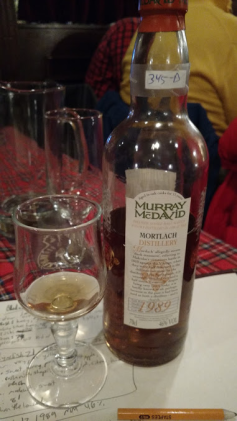 quite nice, but hot for 46%. Just looked at my history and I’ve had 3 Mortlachs over the past few years… I’ve scored each of them an 82, so apparently that’s where I rate Mortlach

Scapa and I don’t have the best history… I’ve had only 2, both OBs, and both have scored in the 70s because I really didn’t enjoy them that much. Here’s hoping Signatory picked a good cask. 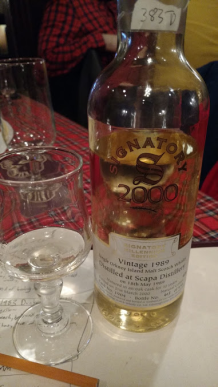 this was the only dram of the lot that wasn’t an IB, and I’ve had it before, at Feather’s a few years ago. I avoided looking back at my reviews so I could compare the notes afterwards 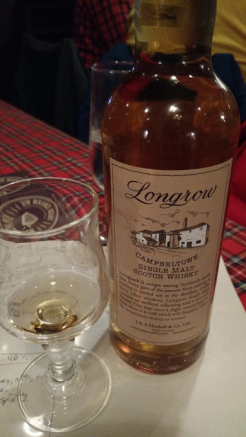 nice but simple. The light peat is a nice change from typical peat bombs. Comparing to the last time I reviewed it, I got more brine out of it last time and scored it 3 points higher. Glad it was in the same range, and I’ll attribute the drop in scores to having had a Longrow Red since then that blew me away, and 150 more reviews!

The last one was supposed to be a Caol Ila 15 1984 from Signatory, but instead, the barkeep accidentally poured the 1989 11yr. He gave us a price reduction on the flight because of the mix-up which was appreciated, but it was still kind of annoying. 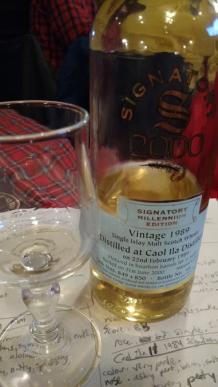 ok but nothing special, and not nearly as good as most Caol Ilas I’ve had.

Overall a very fun night, and a nice change to try some new drams. It’s funny, going in I would have assumed the Caol Ila would be my favourite and the Scapa probably my least favourite and that was nearly opposite! Glad whisky continues to surprise. Looking forward to more events with TWS in 2017!